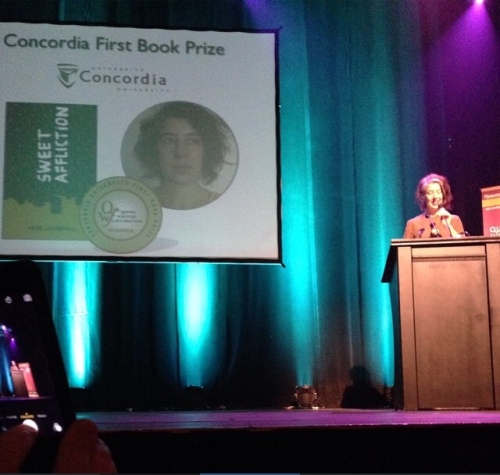 Last Tuesday my collection of short stories Sweet Affliction won the QWF’s Concordia University First Book Prize at the QWF awards gala here in Montreal. It was a very surprising win–I was up against some pretty tough competition. Ian McGillis summarized the QWF awards night in a nice piece that touches upon the apparent arbitrariness of literary awards–as he says, “No two juries, and indeed no two readers, are exactly alike in the way they respond to a book. So it has always been and so, hopefully, shall it always be.”

A few people have asked me what I said in my acceptance speech. The truth is I’m a doink and didn’t write out a speech, but rather had some notes I tried, sort of successfully, to memorize, and have reconstructed here. I may have exaggerated on the side of articulateness. Only people who were there will truly know.

One thing I can’t remember is who I thanked; I know it was a lot of people, and I know it wasn’t enough people. So, here, now: Thanks and gratitude to The Quebec Writers’ Federation, the members of the jury (Licia Canton, Johanna Skibsrud, John Steffler), Natalie St. Pierre, Michelle Sterling, the team at Invisible Publishing, my writing group: Sean Michaels, Melissa Bull and Jeff Miller. Many many others.

Here’s, roughly, what I said.

Publishing your first book is a strange experience. A first book is kind of like a first relationship–it’s full of possiblities, and hope, and your best intentions. And giddiness. And mistakes. You learn a lot from it–you see yourself at your absolute best and your absolute worst. And it will always have a grip on a section of your heart, even when you can’t stand to be in the same room with it. So it’s an honour to be recognized for this shaky newborn-deer of a book, especially by the Quebec Writers’ Federation, who do so much for writers in this province. I also want to congratulate my fellow nominees Sean Michaels and Caroline Vu, who surely recognize some of what I said, and have their own feelings about the process too, which you should probably ask them about tonight.

We’re a community of writers and readers. We’re really good at imagining new worlds. Let’s imagine one where women don’t have to live in fear: of violence, of humiliation, of powerlessness and shame. And let’s not stop at imagining it. Let’s make it real.