I had a conversation with my father once about what his life as a painter was like, and he said he could never truly be an artist because he has a family. The idea being that art requires a true sacrifice, “often of sanity,” as he put it. I wanted to call bullshit on him, not just because I’m implicated. The idea of the ivory tower artist, of Jackson Pollock or Van Gogh vibing out on colour in his studio while his life falls to pieces outside, is pretty stale these days (also pretty sexist if you consider its history of valuing works by “intense” “genius” dudes, who were supported mainly by women). But I feel like I can’t dismiss this idea of worldly rejection the way I once did. I don’t deny that artists live in the world, and need it – “he fits himself to the paint”- but at what point does the world – the worldly world – become the only domain in which you exist?

My dad has this image of Pollock up in his studio.

I write this at a period in my life where I am considering what it would mean to relinquish “the world” in order to be a writer. I find myself preoccupied with things that feel at the moment like schoolyard concerns – love, relationships, self-worth, jealousy, getting laid. Of course, these are the very concerns of literature. I think, in fact, that the original jacket copy of Anna Karenina read “A Tale of Love, Relationships, Self-Worth, Jealousy, and Getting Laid.” I wonder if perhaps I have enough of this raw material – what I called at another point attar – to sustain another fifty years of writing without having to engage in any more of it.

END_OF_DOCUMENT_TOKEN_TO_BE_REPLACED

Well and Proper and Obedient and Pure

In case you’re wondering, the title of this blog comes from an essay by Annie Dillard called Living Like Weasels. It should of course be read in its entirety, but here are a couple passages:

And once, says Ernest Thompson Seton–once, a man shot an eagle out of the sky. He examined the eagle and found the dry skull of a weasel fixed by the jaws to his throat. The supposition is that the eagle had pounced on the weasel and the weasel swiveled and bit as instinct taught him, tooth to neck, and nearly won.

I think it would be well, and proper, and obedient, and pure, to grasp your one necessity and not let it go, to dangle from it limp wherever it takes you. Then even death, where you’re going no matter how you live, cannot you part. Seize it and let it seize you up aloft even, till your eyes burn out and drop; let your musky flesh fall off in shreds, and let your very bones unhinge and scatter, loosened over fields, over fields and woods, lightly, thoughtless, from any height at all, from as high as eagles.

If you know me IRL and have ever wondered about my tattoo, this is as close to an explanation as I can get. I’ve considered sending a picture of it to Annie Dillard, but she would probably think it was weird. 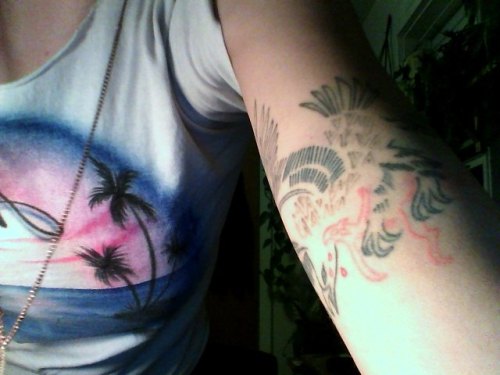