A few days ago my friend and I took a canoe out into a small lake. We stopped paddling and just kind of drifted around for a while, talking about writing and what kind of old people we thought we’d be. We started talking about Girls, which she likes less than I do, and about Sheila Heti and how her writing about female friendships in How Should a Person Be? inspired Lena Dunham in her own explorations, and has thus fostered a lot of talk about female friendships as a valid or invalid topic for writing and other kinds of storytelling. I’m glad that the subject of female-centric work is being talked about, and that the complexity of relationships between women is being taken more and more seriously as a subject. I started thinking, though, that it seems a little shallow to credit Sheila Heti with popularizing girlfriends as a genre or locus for writing. I have been reading about female friendships forever – many of my favourite writers have mined this territory for much of their careers. The first full-length story I published was about a friendship between two young women – you can read it here if you want. 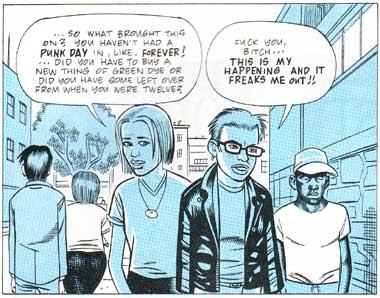 I don’t think these things are easy to write about. I just finished The Satanic Verses, and I’m pretty sure that, despite being over 500 pages long and having some pretty good female characters, it would not pass the Bechdel test. I know it’s not trying to be a representation of women, and I like it a lot for other reasons, to the point where I actually feel quite depressed about having finished it. But it’s still weird to think that with everything Rushdie can do, he can’t – or won’t – write a friendship between women.

I’ve started compiling a list of writers who write almost exclusively, or very insightfully, about relationships between women, or specific books that deal with them. I’m trying not to include books about sisters because then the list would just be way too long, but there might be a couple on there. I’m also not including movies because there’s a billion of them, and also I have very boring taste in movies.

Please add more in the comments, with specific books or stories if you’d like. (I’m not just looking for books where there are women in it who are friends, but ones that specifically address the complexity, depth, and weirdness of women’s relationships with each other.)