I’m bad at year-end lists because I can never remember what happened when. I’d be a terrible witness at a crime scene. But a few books, or reading experiences, stand out for one reason or another. Here’s a brief what, where, when, how and sometimes why.

Aliens & Anorexia by Chris Kraus. I was reading this on the patio of a sports bar near my house. They make great coffee, this sports bar, and if there’s not a soccer game on tv it’s a nice place to read. A man sitting near me checked out the title.
“Aliens and anorexia.”
“Yep.”
Then he checked me out. “But you’re not anorexic.”
“Well, it’s fiction, it’s not a how-to guide.”
He nodded.

I also read Kraus’s I Love Dick, which I wrote about here.

The Picture of Dorian Grey by Oscar Wilde. At first this felt like reading a compendium of Wilde witticisms. I didn’t realize that so many quotes attributed to him were actually things his characters said. I hope no one does that to me: “I’m so fucking high.” – Anna Leventhal.

The Satanic Verses by Salman Rushdie. I had never read this before! Don’t ask me why. I was, as I’ve mentioned earlier, somewhat pious about Rushdie as a young person, and he remains one of my favourite writers. I read the first chapter many years ago, and thought it was the most amazing thing I’d ever read. So amazing, in fact, that I didn’t read the rest of the book, until this fall. I read most of it in a chair in my studio in Johnson, Vermont. One of the nicest things anyone gave me this year was a 1993 paperback copy of the book, published by the Consortium, an anonymous publishing group that came together to bring out the book in paperback in spite of the fatwa. My friend, the one who gave me the book, said he doesn’t give a shit about Salman Rushdie. I’m glad he doesn’t.

Shadowy self portrait , the view from my studio window in vermont

It was hard to find something to read after Satanic Verses, but I went for Bad Behaviour by Mary Gaitskill. It felt a little cold and surface-prickly after the vast heated expanse of SV. In that same armchair in Vermont I also read Train Dreams by Denis Johnson, the Queer Ultraviolence anthology, and a bunch of short stories by Grace Paley, Amy Hempel, and W. Somerset Maugham. Rushdie and Grace Paley were how I would rev myself up to write. The studio next to mine was called the Grace Paley studio. I was jealous, and also relieved, that it wasn’t mine. The building itself was called the Maverick Writing Studios. Every time I’d unlock the door I’d think “I’m not afraid to get mavericky in there.”

Herzog by Saul Bellow. I had also never read Bellow before. What a fucking revelation. I read this mostly on the beach in Cuba, when I should have been reading Hemingway or Graham Greene or something more topical. In Cuba I also read The Free World by David Bezmogis, The Left Hand of Darkness by Ursula Leguin, and Atonement by Ian MacEwan. That’s more or less in order of how much they affected me. I’m just now reading Mr. Sammler’s Planet, also by Bellow. 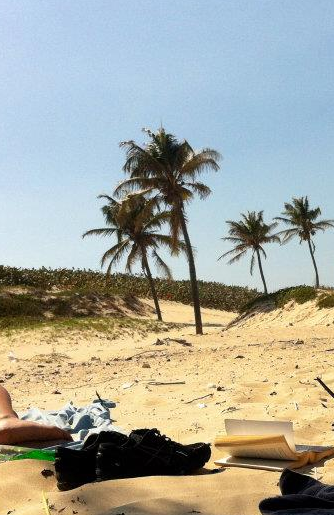 Blood & Guts in High School by Kathy Acker. I am still not sure what’s up with this book. It’s very shocking, but I don’t think it’s shocking for shocking’s sake. Or, if it is, that there’s a politics in that – something about upsetting the bourgeois standard of decorum and self-care. Disease as resistance. Rage as aesthetic.

People Park by Pasha Malla. I read this at a cottage in the Eastern Townships. A startling, sprawling, ominous book that hasn’t received as much critical attention as I thought it would, maybe because people don’t really know how to handle it yet. I interviewed Malla later, at the launch. It was about 400 degrees in the bookstore – everyone was sweating. It was hard to breathe. When I introduced him I got so physically nervous I thought I sounded like I was going to cry. We talked about masculinity, violence, the failure of community, Simpsons references, the grotesque. 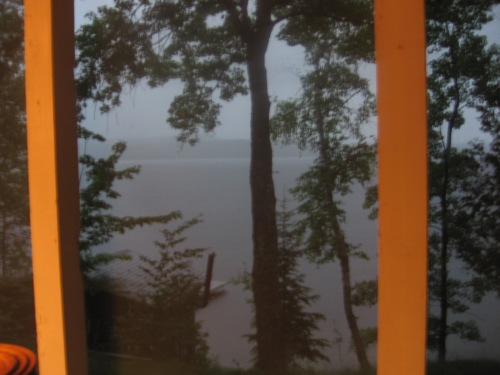 Where I read People Park

I tried to read Disgrace by J.M. Coetzee, on a friend’s recommendation, and I just couldn’t. Maybe because I had recently reread The Corrections by Jonathan Franzen and couldn’t handle another lecherous professor/manic-pixie-dream-girl student relationship. I rarely let a book go, but this one will have to wait. Til patriarchy ends.

Are You My Mother? by Alison Bechdel. I actually whispered “holy shit” to myself several times while reading this, out of recognition as much as admiration.

Why I Write by George Orwell, an essay collection. A slim book, I read it mostly at work and on the metro, along with Willa Cather’s My Mortal Enemy. It was one of the few nonfiction books I read this year.

A guy who regularly eats lunch at the cafe/bar where I work loaned me We Need a Modern Galileo by Gil Adamson when he heard I was a writer. The next week he asked to borrow my bike. I said no, because that’s not how it works. I didn’t read it for a while because it felt like an obligation. When I did, I was startled by its strange, sharp, astute prose.

I reread Watership Down for maybe the hundredth time, and cried approximately every three pages. I started to write something about sentiment, aesthetics, catharsis, but it’s not there yet. Sometimes I get sad because I know I will never write anything that good.